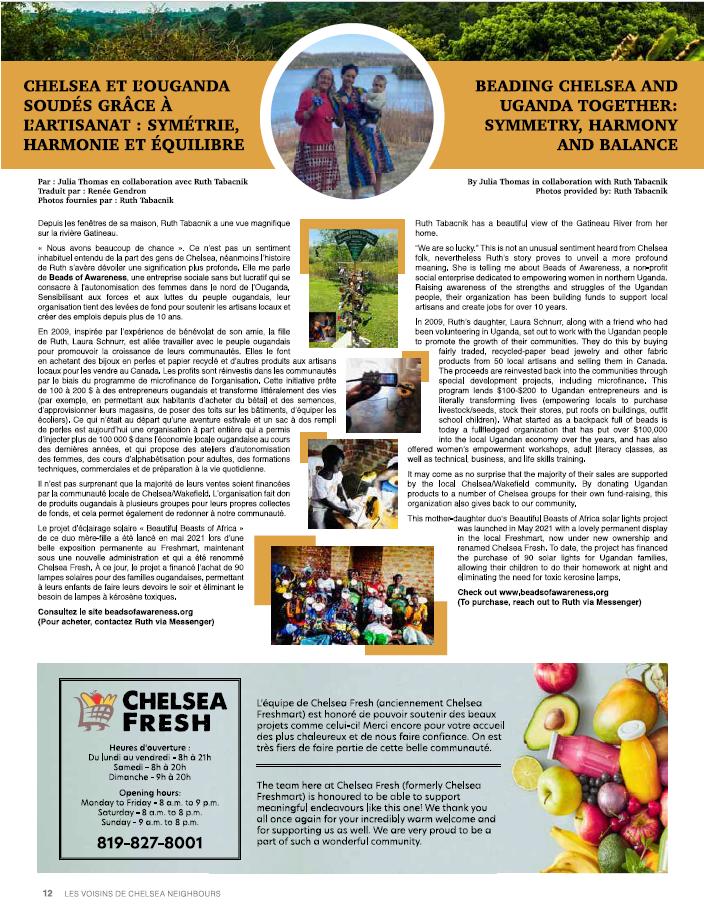 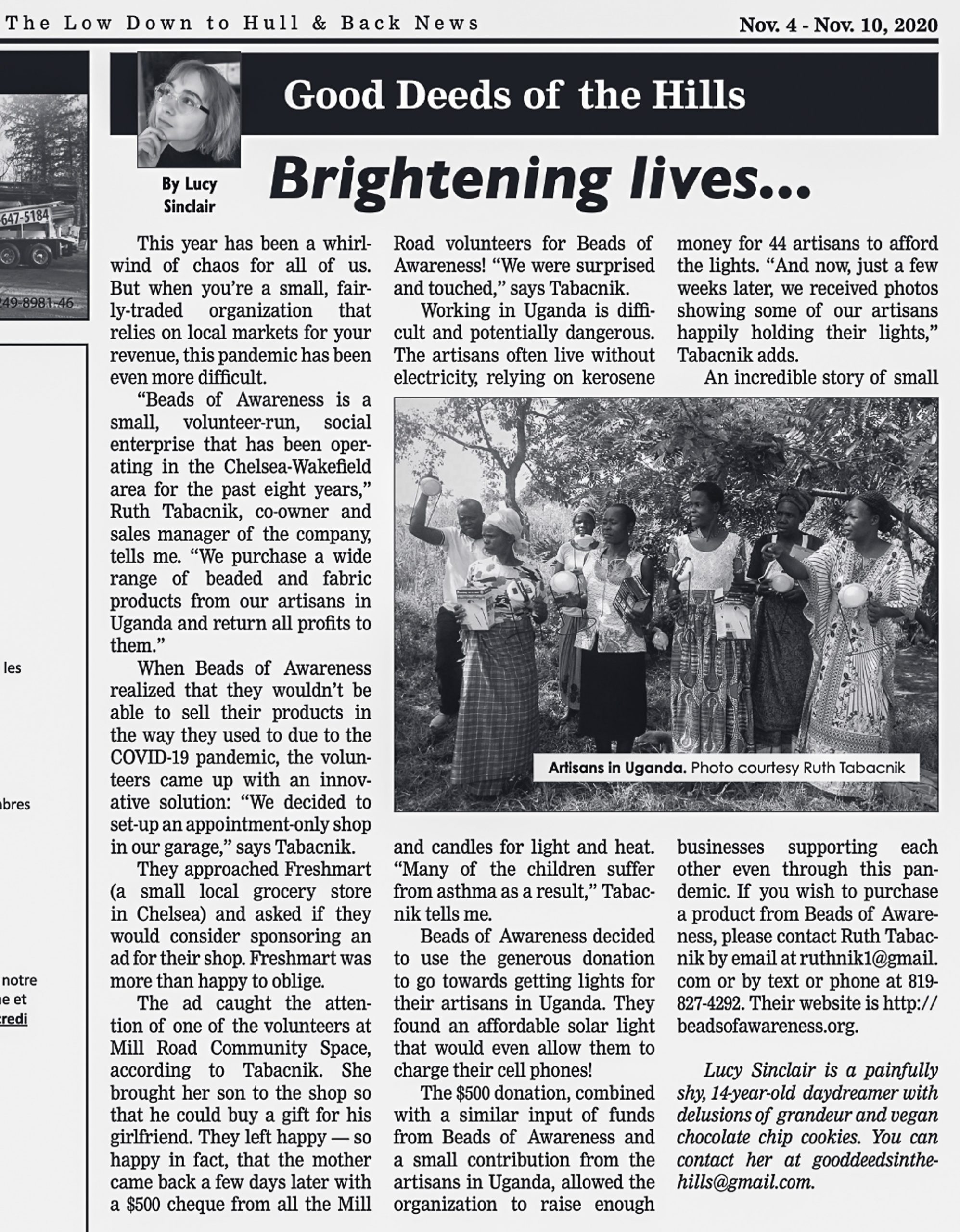 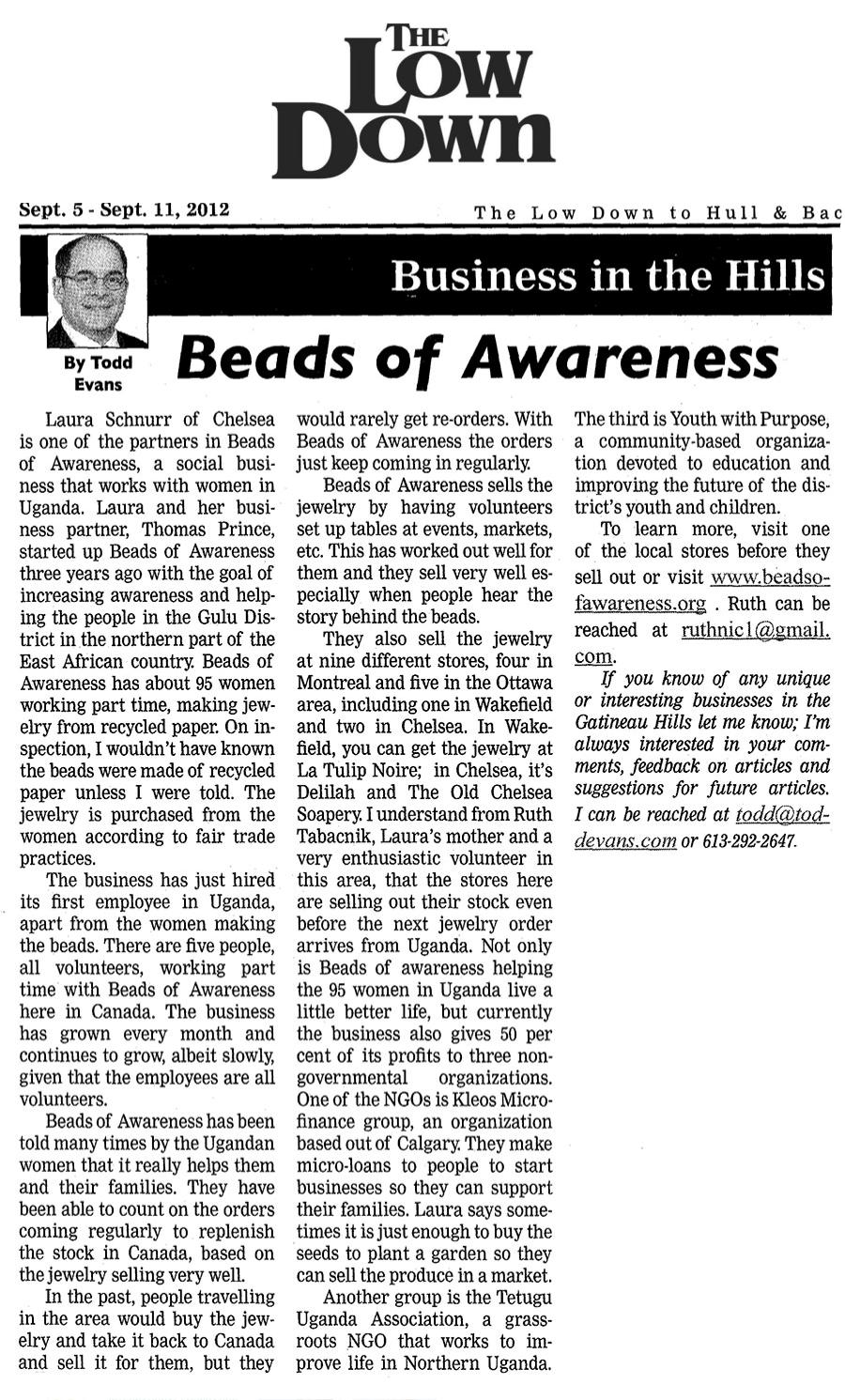 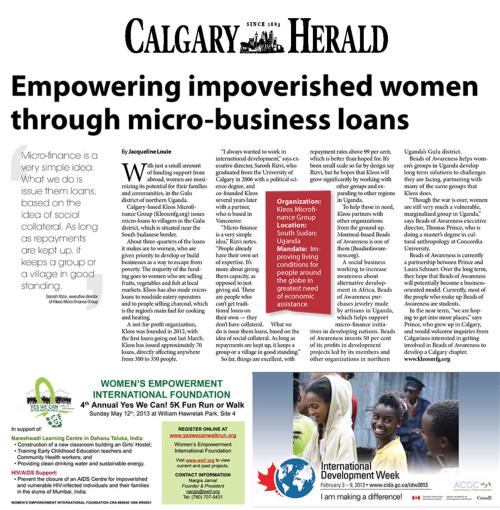 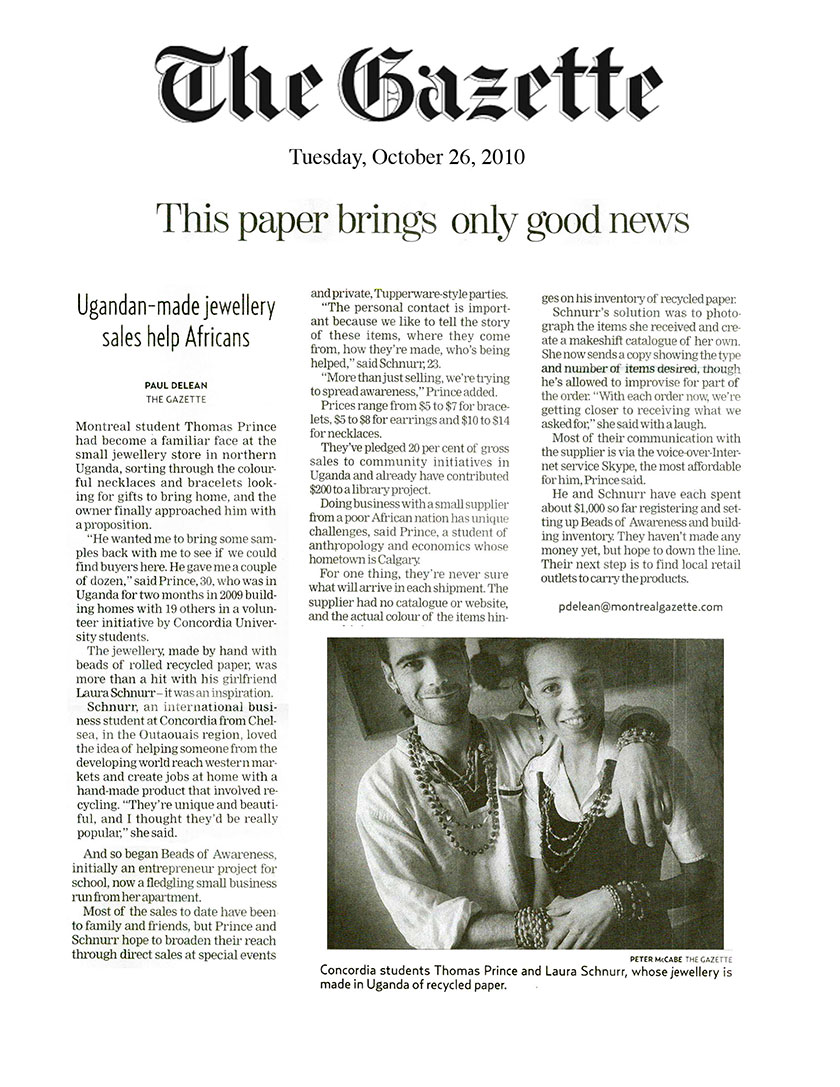 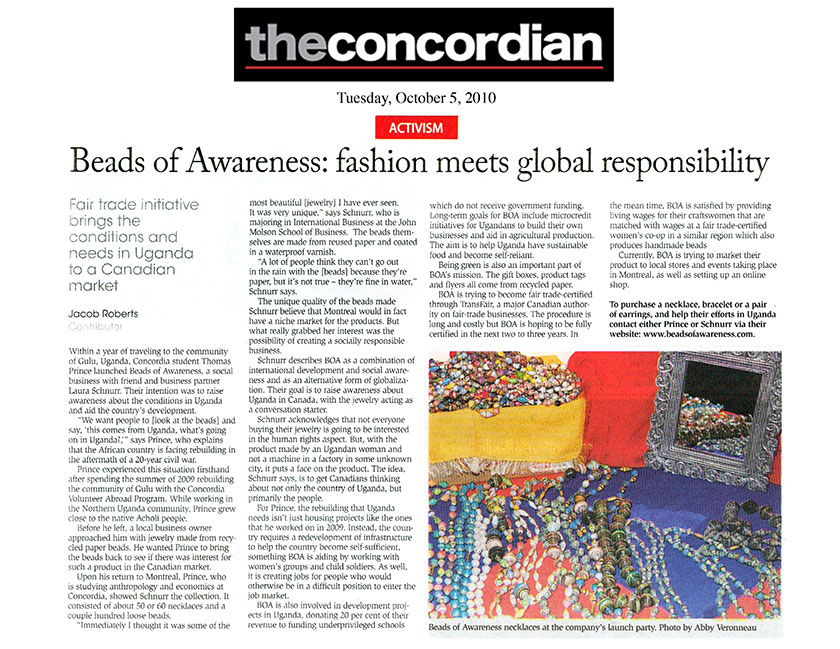 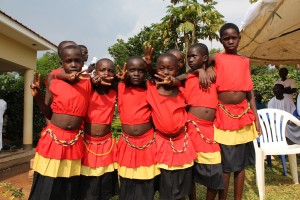 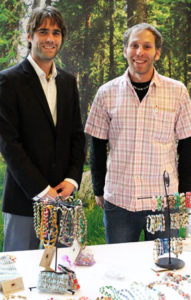 In 2009 I first visited Gulu Uganda as a student volunteer while doing my BA at Concordia University in Montreal.  This was my first time to ever visit the African continent, and it was my first encounter with paper beads.  I learned that making jewelry from recycled paper was a skill women were trained to do while still living in the
IDP camps during the civil war in Northern Uganda. After the war had ended many of these women and their families still continued to struggle to find paying work or to earn a living through agriculture and other small scale activities.  The women wanted to continue selling their paper beads in international markets, but many of the NGOs who started the beading project had either left Gulu with the end of the war, or transitioned to other development projects.

So when I returned to Montreal it was with this request in mind. How to help these women regain this opportunity which ironically peace and the end of the war seemed to deny them. But how to help them, and how to make sure it could be something that would endure and not simply fade away, disappointing the women once again. It was with the advice and guidance of a close friend, Laura Schnurr, who was finishing her BComm, that Beads of Awareness was born. Though we both recognized that as students our time was limited, our resources and knowledge even more so, we agreed that the best way to ensure that the business worked to maximize the involvement and benefits of our partners in Uganda was to build something ourselves.

Three years down the road Beads of Awareness continues to be a small business. In fact Laura and I are still in school, though fortunately both on 2nd degrees, and the majority of others who have joined our ranks in roles small and large have also been students. I believe all of us who are involved are not content to sit idle and wait for change, or wait for doors to open. We prefer to knock on those doors, and take our own hesitant steps towards a future we build together. And as students I think we recognize how valuable this opportunity to learn and experiment is. And I would be amiss to not recognize our members and volunteers who aren’t students are just as implicated in this culture of discovery and learning. Not only do these people offer us invaluable mentorship and wisdom, they are also helping us find ways to grow and involve others beyond students.

Getting the blog rolling

As we are re-tolling the website with the new design, online store, and integrating the blog to the site, there will no doubt be changes and a lot of learning, especially for me.  Technology really isn’t my forte, but I like to think of myself as a people person, so I guess I best learn the advantages of technology in reaching out to others.  In fact the use of technology, and more importantly on communication and recognizing our shared humanity are central values for myself and Beads of Awareness, and I really hope that this website and our efforts in the future will move us towards creating bridges and networks across continents. With all the talk of technology and globalization maker the world smaller or inter-connected, we need to make sure that we don’t just buy simple and catchy narratives, but instead to really consider them, and to think about where we position ourselves and others within them.

In Gulu definitely the spread of technology is having a major impact, as cell phones, solar panels and the internet are becoming more widely available and more affordable. However does letting someone in Gulu log in to facebook mean that we can generalize them as another faceless consumer? I would argue from my own limited work and learning in Gulu that generalizing is a huge problem, whether we try to erase cultural values and history and present a picture of you -and-me : ‘we-re the same’ or a much more negative picture of ‘un-educated, trapped in poverty, victims waiting to be saved. Both representations are extremely problematic, and equally fictious.  If you want to know how things are somewhere else, well a safe starting guess is that like here (where ever here maybe) is complex, diverse and messy.  It is  not easy to say everyone is like this or does that.  It simply isn’t true. As we continue to improve and expand our website I hope that we can do more to offer a platform for people from different parts of the world to interact, share their ideas and ultimately find ways to co-operate to address the many systemic and nebulous inequalities and hardships built into the modern, global world. The solutions won’t come easily, but at least we can try and build a rich conversation. 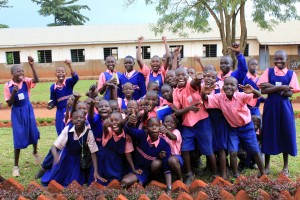 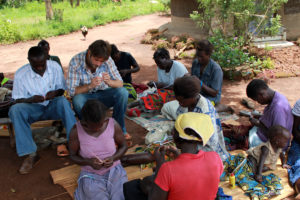